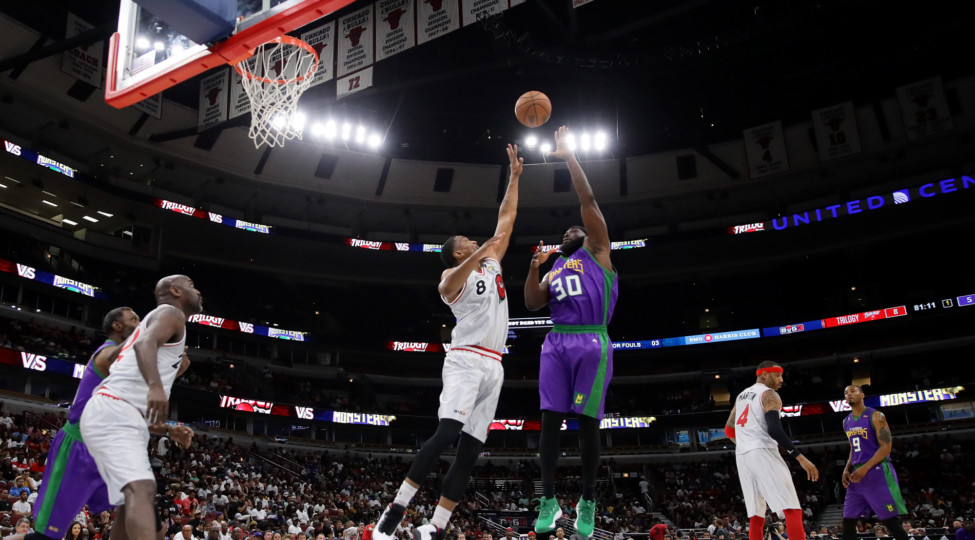 Is It Must-Win Time for the Defending Champs?

When the BIG3 tips off its Week 3 schedule Friday night, they will be doing so in Oakland, California’s Oracle Arena, home of the Golden State Warriors — a true dynasty in today’s sports world. If Kenyon Martin and Trilogy have any hopes of following in the Warriors’ footsteps, then their matchup with 3’s Company is close to a must-win game.

K-Mart’s squad went a perfect 10-0 in the BIG3’s inaugural season, capped with a win over the 3-Headed Monsters in the championship game. While they were heavy favorites to repeat in 2018, Trilogy finds itself 0-2 after losses to Tri-State and the 3-Headed Monsters — both losses by double-digits.

Can they bounce back? We’ll find out early on Friday, as Trilogy plays Game 1 of the Week 3 schedule in front of a worldwide audience on Facebook Watch.

Here’s a preview of the Week 3 games:

TRILOGY (0-2) vs. 3’S COMPANY (1-1) – 7 p.m. ET on Facebook Watch
Trilogy is looking for its first win of the season, and to make matters worse they must do so without one of their best players. Rashad McCants, the BIG3 Championship Game MVP, is out this week with an injury – his replacement on the roster this week is Al Thornton. There could be some revenge motivation here, as Thornton played for 3’s Company last season (averaging 11 points, with a pair of 4-pointers, and 4 rebounds)… While McCants and Al Harrington have struggled thus far, James White has carried the mantle for Trilogy – he leads the team in points (24), rebounds (9) and assists (4)… For 3’s Company, new co-captain Baron Davis has been something of a one-man band. He leads the league in scoring, and his 44 points account for 46 percent of the team’s scoring output. Davis hit two 4-pointers last week and he’s also got five 3-pointers on the season… Another 3’s Company newcomer, Andre Emmett, leads the league with 3 steals.

GHOST BALLERS (0-2) vs. BALL HOGS (0-2) – 8 p.m. on FOX
One of these teams will get its first win of the season… The Ghost Ballers feature two of the league’s top five scorers after two weeks – Carlos boozer (37 points) is fourth and Ricky Davis (33) is fifth. Boozer and Davis have scored 76 percent of the team’s points through two games… Ghost Ballers captain Mike Bibby has 7 assists (tied for second)… For the Ball Hogs, Andre Owens and DeShawn Stevenson have combined to score 66 percent of their team’s points. Stevenson has three 3-pointers through the first two games, but last year he averaged four 3-pointers per game.

POWER (2-0) vs. TRI-STATE (2-0) — FOX
The only battle of unbeatens this week features the two teams with the biggest point differential through two weeks of the season. Tri-State has scored the most points (102) and allowed the least (68) this season, for a plus-34 point differential. Power’s differential is plus-26 (101-75)… Power captain Corey Maggette leads the team in scoring (33 points), rebounds (18, tied for second in BIG3) and assists (7, tied for second)… Power co-captain Glen “Big Baby” Davis continues to play strong in the paint, with 25 points… Chris “Birdman” Andersen leads the league with 3 blocked shots… Tri-State’s David Hawkins has been one of the biggest surprises of the young season. He’s second in the league with 39 points and first in assists with 11… Tri-State captain Jermaine O’Neal has a FG percentage of .733 (11-of-15), the best rate for any player with more than two attempts.

KILLER 3S (1-1) vs. 3-HEADED MONSTERS (2-0) — FOX
The Killer 3s got their first win of the season last week vs. the Ghost Ballers; they started the 2017 season 0-3, so they’re ahead of the game… Stephen Jackson scored 28 points last week, two shy of the BIG3 single-game record. Jackson has 38 points in the first two games, third in the league… Killer 3s co-captain Metta World Peace is off to a good start in his first BIG3 season, with 18 points and 13 boards… The 3-Headed Monsters are off to a strong start, with three players who have at least 25 points – Rashard Lewis (29), Reggie Evans (26) and newcomer Qyntel Woods (25)… Evans, last year’s rebounding champ, leads the BIG3 with 20 through two games.