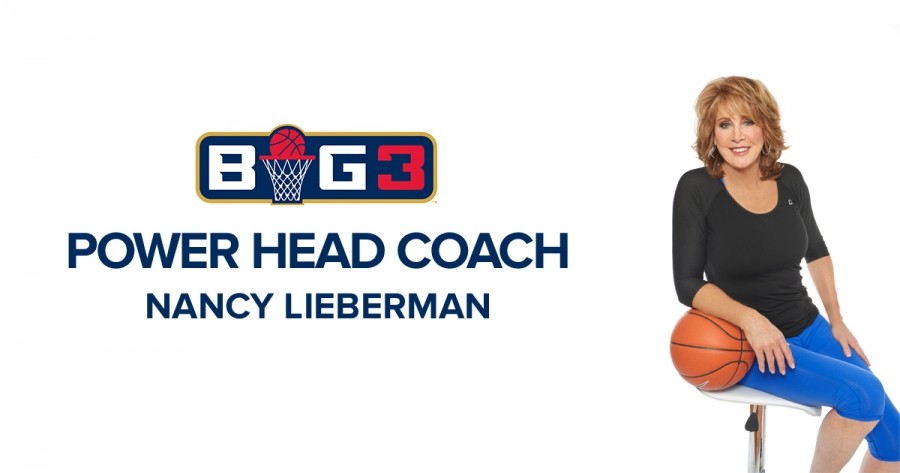 (LOS ANGELES) March 21, 2018 – The BIG3 has signed WNBA superstar and Hall of Famer Nancy Lieberman as the next coach of Power, making her the first female head coach in a men’s professional sports league. Lieberman will assume the coaching position vacated by Clyde Drexler who became league commissioner last week.

“Nancy is one of the sharpest basketball minds and also one of the most competitive,” said BIG3 Commissioner Clyde Drexler. “Her experience and basketball acumen will stand out in the BIG3, which is filled with star players and coaches. I couldn’t be happier to pass her the coaching torch.”

Lieberman, who got a taste of the BIG3 during the inaugural season when she joined Ball Hogs Coach Rick Barry as a guest Assistant Coach for Week 6 in Dallas, will coach Power Captain Corey Maggette and Co-Captain Cuttino Mobley. Team Power, which finished the season in fourth place after falling to Ricky Davis’ Ghost Ballers in the BIG3 Playoffs, will fill three roster spots during the 2018 BIG3 Draft set to take place Thursday, April 12 live on FS1 and the FOX Sports GO and FOX Sports apps.

“It’s an honor and privilege for me to be a part of the BIG3 and its vision,” said Nancy Lieberman. “We have former NBA players and Hall of Fame coaches who still love the game, have a deep respect for the competition, and a passion to play competitive basketball. It’s in our DNA. Ice Cube and Jeff Kwatinetz have provided this unique platform for all of us. Who’s got next?!”

Lieberman brings an unparalleled resume to the league, including eight years of professional play in the Women’s Professional Basketball League and WNBA, eight years of professional coaching experience in the WNBA, NBA D-League (Texas Legends Head Coach) and NBA (Sacramento Kings Assistant Coach), and time as a broadcaster for ESPN and ABC. Lieberman also made two Olympic appearances (earning a silver medal) and was named to three All-American teams while winning back-to-back AIAW National Championships at Old Dominion University.

“We have added an absolutely tremendous coach in Nancy Lieberman – not a tremendous female coach, a tremendous coach, period,” said BIG3 Chairman Amy Trask. “With this latest addition to our BIG3 team, Ice Cube and Jeff Kwatinetz have again demonstrated that they hire without regard to gender, race, religion, ethnicity and other individualities which have no bearing whatsoever on whether one can do a job.”

BIG3 Co-Founder and Co-CEO Ice Cube added, “She was a helluva player and she’s a helluva coach. Nancy’s a winner and I expect her to win in this league.”

The 2018 BIG3 season kicks off Friday, June 22 at the Toyota Center in Houston.